Reduce stress: Stop wanting things to be other than what they really are 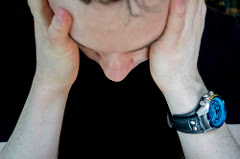 In the forest, when a hunter fires his or her weapon, the shattering blast explodes in the silence of the gentle trees and streams.  The animals are startled and some stand frozen in place, wondering what danger has entered the boundaries of their otherwise safe and quiet home.

And so it is among us humans when another mass shooting has taken place.  Our modern "forests" are much louder, busier, and hectic; but we freeze all the same when the explosion of danger has entered the arena of what we had taken to be a safe and enjoyable surrounding.

So too, with the newest of public shootings occurring in Las Vegas, we can't help but be like the animals in the forest--startled, hyper vigilant, confused and afraid.

Yet, the reality of these events is something we cannot turn away from.  More than ever it's important for us to look even closer at what the problem could be and what we can do to try to remedy this increasing phenomena--which statistics show is now occurring more frequently and more severely with each new event?

If we are to help put an end to such events in the world, we have to begin within ourselves and deal with the issues festering inside each one of us.  Of the many suggestions that are sure to flood the stage in the aftermath of this event, I start by offering the suggestion that  we each try on this idea:

STOP WANTING THINGS TO BE OTHER THAN WHAT THEY REALLY ARE!

Look at your own life and ask yourself what things you personally are frustrated with because they just aren't going your way.  The boss "should" act a certain way, and isn't.  The kids "should" be more respectful, and aren't.  The traffic "should" roll more smoothly, and doesn't.  You "should" be getting paid more and fairly, and aren't.  The list is endless.  Whatever it is, you believe it should be going some other way than it is, and if it's not, then frustration sets in.

On a small scale, these are the seedlings of emotion that, when ruminated upon, can lead to violence that is expressed outwardly and into the world where others can get hurt.  If someone wants the world to go a certain way, then when it doesn't, frustration grows into anger, and anger become rage.  When an individual can't control how things are going in life,  they might try to find ways to gain control by any means.  That's why it's important that we teach the children of our society what tolerance is, and not just tolerance for others, but also for disappointments and let downs that are an inevitable part of everyone's life.

Both anxiety and depression can also be reduces with a focus on this task.  To believe that life will never have anxiety or depression is completely unrealistic, but knowing that life will have it's ups and downs, and that when things don't go your way, you can cope without feeding the fire by ruminations that convince you that life should be something other than what it really is at the moment.

Learn what you can "reasonably" change (non-violently), and never ever convince yourself that if you can't have what you want in life (i.e., if life is not going the way you want it to), that you must destroy something to show the world the magnitude of your frustration.

Thanks to jseliger2 for the great photo - frustration
Posted by Mary M Foster, MA LPC at 8:33 PM