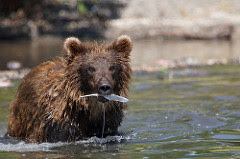 I once saw a video of a grizzly bear running into a river stream to catch salmon.  It was so excited about the abundance of fish that it would catch one and rush back to shore with it, get it half eaten, and then notice another fish in the water, at which point it would drop the one it had and rush back in the water to get the next one.  Then it would do the same with the next fish and before you knew it, the bear had two or three fish going at once and was actually missing out on the full experience of eating each one because it was so distracted by wanting them all.

Reaching the end of the year can be a bit like that as we may barely get our holiday gifts open and our year-end events complete, before we see more awaiting us when the calendar turns at midnight on December 31st.

The end of the year can be peaceful and rewarding, especially if you've had a good year and have many things to be thankful for.  But it can also be very stressful as well.

Some see December 31st, not as a time for celebration, but worry and panic about what has not been finished for the year and the looming tasks pressing for attention, such as setting new goals and the coming need to file taxes and start the new year on an uncluttered note.

First things first!  It's important to finish what you're doing first so as not to miss it completely.  In other words, you can't be mindful about finishing the year if your thoughts are already "not present", but ruminating about the future.

Think about this.  If you spend the moments between Christmas Day and New Years Day worrying about the new year, then you miss all the moments in between.  The end of December never happens because you aren't present to experience it.

Allow yourself to enjoy the end of the year and savor the fish you have.  When the new year arrives, you'll know it, and it's then that you can go after more fish.

Thanks to Harald Deischinger for the great photo
Posted by Mary M Foster, MA LPC at 7:54 AM 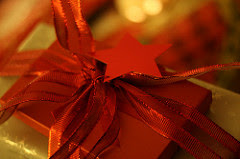 The Holiday season is a time for cheer and celebration, but it can also be a great time of stress for many.

On this Christmas Day you may find yourself picking up wrapping paper and looking at a house turned upside down by the joy of gift giving and visiting relatives.  That's why it's all the more important to take some time to re-energize.

Little things on this special day can help you find the energy you need to make it through the final visits, farewells and clutter clearing.  Here are some ideas:

1.  Relish that morning cup of tea or coffee by making it a mindful moment.  Focusing just on the warmth of the cup, the flavor, the visual of the steam coming up from the surface.

2.  Notice the traditional aromas around you that you may not smell again until next year.  The smell of the pine tree, candles and even seasonal foods that are only cooked this time of year.

3.  Savor your time with relatives that may not be seen again for 6 to 12 months.

4.  Don't forget to fit in your daily meditation, even if you have to fit it in just before bed or in the early morning before your guests awake.

5.  Sing holiday songs that are only fitting once every twelve months.  Put in a CD or find some of the nice music online.

6.  Savor your time off from work while it's here.  Hang out by the tree and take in the joy of your holiday decorations since they will not be up again for an entire year.

Thanks to Shimelle Laine for her great holiday photo
Posted by Mary M Foster, MA LPC at 11:31 AM