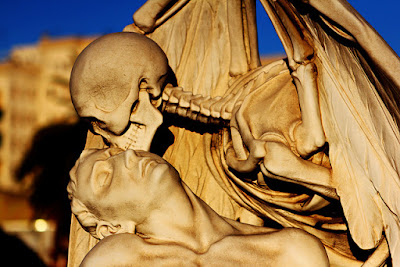 According to Terror Management Theory (TMT), we human beings go out of our way to avoid the reality that we will all, eventually, die.  Much of our everyday anxiety can be traced to this fear and the avoidance behavior that follows.  In fact, you've probably already felt unease by this photo of the famous sculpture, The Kiss of Death, which has a tendency to have mixed responses from viewers who are either drawn to it or repulsed.

Our fear of death can drive us to perform a lot of avoidance behaviors in life.  From avoiding a drive on the street closest to the cemetery, to drinking or using other substances to numb out from the reality that life has limitations and will not go on forever.  A healthier approach to the reality of death is to come to terms with it in a way that allows you to live your life as fully and meaningfully as possible without denying its eventual end.  Extreme avoidance of this reality can lead to delusional, faulty, and catastrophic thinking.

Many of the more common anxieties among humans stem from this typically unconscious fear of death, including the fear of traveling over bridges, the fear of heights, the fear of traffic, and the fear of dangerous animals.  But what really happens when fear takes hold is a faulty thinking style called Catastrophic Thinking.

In Catastrophic Thinking, people tend to leap from a first thought, such as, "What if the bridge collapses?", to a rapid set of thoughts that are unconscious, and which trigger each other like dominoes falling one on the other.  As the fear thoughts are triggered, they eventually end in a catastrophic thought such as, "I'll die", or "I'll be injured or unable to survive", or "I won't be able to handle it, and that  will be the end."

Catastrophic Thinking can be approached with a couple of coping skills.  First, we can practice something called Positive What Ifs, in which we rethink the fear thoughts and trigger a whole new set of feelings.  For instance, we might consider "What if the bridge does not fall?  Then what?"  This question promotes a new set of thoughts that like before, trigger each other like dominoes falling, but the end result is a thought such as, "Well, then I'd just walk across it and go on with my day."

Another approach to tackling Catastrophic Thinking is to use a scaling question in which a scale from 1 to 100 is used to rationalize the thinking.  On the scale, 100 represents the chances that the event will actually happen.  If you are 100% sure an event will happen, then you would rate the fear thought at 100%.  But if you use some rationalizing, then you would first ask questions such as, "If the bridge has been there for years and has never fallen, then the chances of it falling today when I walk over it are about 5% or less."  Realizing the rational helps lower fears and reduce the chance of catastrophic thinking, as well as the anxiety that would follow.

The thing to remember is that our brain is wired to be on the lookout for dangers because we have a survival instinct and fear death, but we can sometimes over-do it with our worry and begin to think our way into fearing death a little too much.  To believe that things are more dangerous than they really are is a form of faulty thinking, but we can reduce or minimize unnecessary faulty thinking by practicing our rational exercises and disputing negative thoughts.

Thanks to feistytortilla for the great photo
https://creativecommons.org/licenses/by/4.0/
Posted by Mary M Foster, MA LPC at 6:43 PM