Reduce Stress through the Art of Compromises 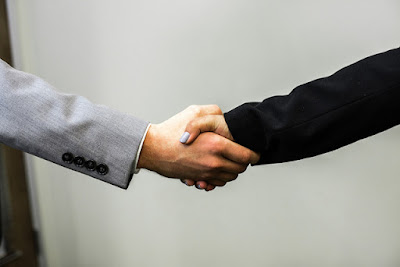 Polarization seems to be a growing fad in the United States, and even globally, really.  Opponents of one side of an issue dig in their heels and close their minds and ears to hearing from those who disagree with them, or who may have differing views to present.

A lot of stress is created when those who disagree with each other refuse to take steps to meet halfway.  This can only be done by means of the apparent lost art of compromise, which is something we are in short supply of lately.  Yet compromise could be the solution to a lot of situations that are leading to a growing amount of stress in communities across the country.  Learning about compromise and improving your skill at it can help you be a part of the solution in your own community, family, and workplace.  And we all know that getting things corrected in these smaller arenas leads to correction nationally.

Let's begin with the definition of compromise:  "an agreement or a settlement of a dispute that is reached by each side making concessions."  What does concessions mean?  It means that you give in a little bit by giving up something.  Notice that compromise is not that each side makes more demands, or more insistences, or is more forceful than the other side, or even attempts to "win" by any means possible.  Instead, a compromise is when opponents of BOTH sides of an issue, give up something in order to give in just enough to meet the other side halfway.  Also notice, it does not mean that just one side gives in, but that BOTH sides give in.

If Sue wants dinner at 7pm and Sarah wants dinner at 5pm, a compromise is to meet halfway and have dinner at 6pm.  If Bill wants a salary raise of $5000 a year and the budget suggests only $4000, maybe a compromise could be made to raise Bill's salary by $4500 to keep a good employee and not break the bank.  These kinds of compromises happen because each side is willing to give in a little bit (i.e., make concessions).

Where problems begin to happen is when one or both sides refuse to give up their demands and feel entitled to get their way without compromises.  In fact, more and more we hear the phrase, "We are not willing to make concessions."  Which is basically saying that one is not willing to give up anything at all in order to meet another halfway.

Here are some ideas to help you practice learning to compromise on a more frequent basis in order to prevent relationship or conversational problems from bogging down into stagnation.

*Before approaching a conflict, debate, conversation, ask yourself what areas of the topic or issue at hand you would be willing to give up or let go of a little, as these are the least significant areas in which you would have concessions to offer.

*Determine where your own moral and ethical boundary will be on any given issue so you know where you are able to give in a little and let some things go.  Don't dwell on what you refuse to give up, but on what you are willing to let go of.

*Try to determine in what areas you actually agree or could agree partially with any opposing view so that you are able to verbalize that you can see, or partially see, your opponent's point of view.  This is a place you can honestly say, "I give you that."  That is a concession.

*Keep the end goal in mind.  This helps you push yourself a little harder to try for a compromise instead of tossing the end goal out the window because you can't have your way.  The aim is to move things forward through compromise, not get bogged down in stubborn refusals.

Creating a system of compromise in your family, workplace and community helps to create a system that lets everyone know they will be treated fairly.  If only one person in the family, community or workplace always got their way and no compromises were ever made, others would feel slighted and only stress would follow.  Compromise is a great art to develop individually and collectively.  It's what democracy is all about.

Thanks to Amtecphotos for the great photo
https://creativecommons.org/licenses/by-sa/4.0/
Posted by Mary M Foster, MA LPC at 3:52 PM