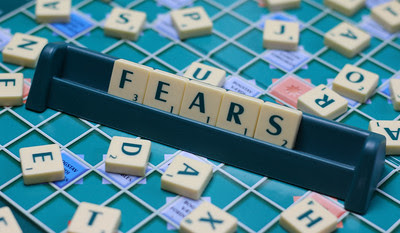 Most of us are too young to have experienced the famous radio show broadcast of the "War of  the Worlds" in 1938, in which a radio theatre presented (quite realistically), the idea that Martians had invaded the world.  There was an immediate fear response based on belief that the story being broadcast was real.  There was "widespread outrage" later, and the broadcasters were heavily criticized for being deceptive.  There were even "calls for regulation by the Federal Communications Commission."

As I write this current blog entry it is only 22 days to the 2020 election.  Already the mood and energy approaching that day is stirring.  It's not exactly exciting, and not exactly even a relief.  Instead, I sense that many people are having anticipatory anxiety, or perhaps unease about another unknown-to-come and all the chain of events that will follow either outcome.  Unfortunately, like the War of the Worlds broadcast, there are all kinds of fear inducing stories being weaved throughout social media right now, and it seems anxiety and stress are high in many corners of the globe.

In the duration period between November 3rd, 2020, and inauguration day in January, we American citizens are not going to be very much unlike a scared (but well-meaning) resident who, with good intention, buys a gun for protection in the home.  But how many times have we all read the sad story of such a citizen, having taken all the necessary safety classes about the handling and storage of that gun, who then finds themselves face to face with an apparent intruder in the night and is forced to make a decision one never thought they'd  have to.  Yet, on seeing a shadow through groggy eyes, pulls the trigger, only to discover later that they have killed their own child or spouse, or perhaps a visiting guest just moving about in the night to find the restroom.

It's probably true that, like the citizen who buys a gun for protection, most Americans have good intention to protect this home they call the United States.  But just like the groggy-eyed home-owner in the night, we are also at risk after November 3rd of accidentally and inadvertently harming members of our own communities.  So stress and anxiety levels during that time will need to be kept in check.  Preparing for this difficult pocket of time now can help you stay focused on reality, and be ready to decipher what's real and what's hype in the midst of the after-election chaos that is coming.  And ...it is coming.

We know there is no "War of the Worlds", so how do we work now to avoid belief in such false and unnecessary fear stories.  How do we work to stay calm during the coming duration from November 3rd, 2020, to inauguration day on January 20th?

Well, usually anxiety surfaces with the activation of the fight or flight response, and because of the highly charged political atmosphere in the country right now, we are becoming either hypervigilant (i.e., a response usually resulting from trauma), or we are becoming full of anticipatory anxiety about what's coming up next (i.e. debates, protests, elections, etc.).  One of the first things to prepare for now is deciphering sensationalized stories that are frequently promoted on social media.  So be vigilant for these as they are more unbelievable (and certainly more obvious) than many care to admit.

In addition, be very realistic about the kinds of things that will show up in your Facebook or twitter feeds after the elections.  It goes without saying that you should not buy into anything that suggests you take up your arms and head for the streets.  Anything that promotes such kinds of behavior after the elections should be immediately suspect and dismissed.  Don't go running with your weapon to greet that "intruder in the night".  It's exactly what we don't need and is the result of a fear and belief response that is misguided and dangerous.  If we believe we are in danger, anxiety levels will rise.  So one of the most important things you can do to lower your stress and anxiety is to work very hard to decipher if your belief in sudden fear-promoting stories are realistic or not.

Regardless of the election outcome, actively participating in an ongoing set of relaxation techniques will be key in staying stress free in November, December and on into the New Year.  Increasing use of meditation, progressive muscle relaxation, guided imagery, breath work, art therapy, journaling and all the things you have found helpful in the past to keep your stress level down, should be ready.  Pay attention to where your "what if" thinking goes and rein in all forms of Catastrophic Thinking.

As has been said many times in this blog, it's what we believe that leads to the rise in our anxiety.  If we truly believe there is danger, then the body will react with a fear (anxiety/stress) response.  So be very vigilant right now about what you really believe is and is not dangerous.  After the election in particular, be fully aware of what it is you are buying into and how your body is responding to those beliefs.  Be a part of the rational thinking that can take place during that time, and not a part of any false narrative that is being spun and fed to social media in the form of memes.

Thanks to pluslexia for the great photo   *https://creativecommons.org/licenses/by/2.0/