Back to Nature: Balancing Our Stress Level with Mother Earth 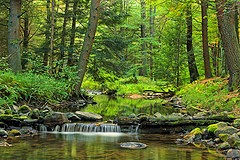 The Taoists teach that humans must come to understand that they are a part of the natural world and that living in harmony with nature brings the world and people into balance.  But as Eckart Tolle points out, humans “can no longer perceive the sacredness that is there in nature” because we are instead “living in the prison of our minds.”


Evidence of this imbalance is revealed in the rising stress and anxiety levels among the people of the world.  Our need for finding balance with nature is now higher than ever, and seeking ways to get back to nature may be the very thing many of us need to bring our own levels of stress to a more manageable place.


Getting back to nature can be as simple as finding a local pond or stream to spend time by, as well as watching the wildlife that frequents these places and listening to the sounds created by the natural surroundings there.  We can break away as far as the mountains and deep forests, or as close as local hiking trails.  If all else fails, we can at least find a local park where the grass, trees and ponds—as artificial as they may be—can give us a place to pause.


Other ways to get back in touch with nature are activities such as gardening, hiking, camping, or doing something as simple as climbing a tree and feeling the bark of its trunk on your hands.  Any of these can help you reconnect with Mother Earth and the natural elements you have in common with her.
Thanks to  Nicholas A Tonelli
Posted by Mary M Foster, MA LPC at 9:46 AM

A Gentle Cup of Tea to Help You Relax 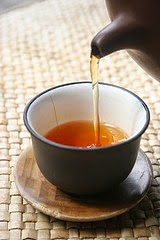 According to legend, the great Chan (Zen) master Bodhidharma was angry at himself for falling asleep while meditating.  So he cut off his eyelids and threw them to the ground where they became the first tea plants.  This is why many depictions of Bodhidharma present him with large bulging eyes.

Stories like this are a part of the rich history of tea preparation or drinking, and frequently associates tea with meditation, mindfulness and relaxation.  Sitting down for a cup of tea can include the feel of a warm--and many times decorative--cup in your hands, the aroma of nicely brewed tea selected from the multiple varieties available, and the gentle slow pace involved in mindfully preparing and drinking it.  It can be a very spiritual experience and many times has a ritualistic process and history.

Stress reduction is just one of the many benefits associated with drinking tea, but the knowing is in the doing--or I  should say...in the drinking.  A cup of tea gives us grounding--something that anchors us to the present moment.  Our full attention is given to the senses of taste, smell, touch, and vision.  If conversation is present, it may only be about the taste of the tea, the beauty of the cup, or the tea's aroma and color--all of which are in the present moment.

There is a quote by the renowned Vietnamese Zen Master Thich Nhat Hanh that reads, "Drink your tea slowly and reverently, as if it is the axis on which the world earth revolves - slowly, evenly, without rushing toward the future."

Some people worry that they will have to bypass the great experience of tea drinking due to the caffeine content in many teas, but keep in mind that it's not necessarily true that the caffeine in tea should counter the body's relaxation process.  According to my teacher Ken Cohen (Gao Han)--a tea connoisseur and life-long practitioner of qigong and tai chi chuan--caffeine is water-soluble, so the pre-rinsing and first steeping tease out a significant amount of flavor, aroma and caffeine, which creates a decaffeination process that increases with each subsequent steeping.

You don't have to be an expert in the history of tea or its preparation in order to benefit and enjoy an occasional relaxing cup of tea.  Just allow yourself to start with a simple loose leaf, oolong or green tea, and follow the basic brewing steps noted on Cohen's website (see link above).  Once you get the feel for it, you can determine your level of interest and enthusiasm from there.

Thanks to Fred Jala for his great photograph
Posted by Mary M Foster, MA LPC at 6:55 PM 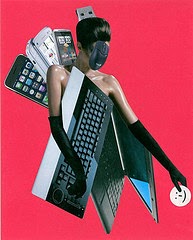 Are gadgets stressful?  When we struggle with them they are.  When the battery dies or a lever or button breaks and we can’t get the thing to do what we want.  But perfectly functional gadgets can be stressful too when they begin to interrupt the natural flow of life rather than aid us as they were originally meant to do.


It’s really too late to go back in time and prevent all the modern electronic gadgets from entering our world, and who would want to.  Many of these devices are life savers and helpful in every aspect.  But let’s not forget our humanness.  We need rest from these gadgets that push us from the moment they blast us out of bed with alarms, to the moment they put us to bed with clap-off lights.

So here are some ideas:

When taking your 15 minute break at work (if you even still get one these days), be sure to leave the cell phone at your desk.  I know.  I know.  The very thought of missing one single call or message is blaspheme to most, but I know you want to reduce your stress level.  So read on.


Think, instead, about taking a walk outside where you can stretch the muscles of the eyes by focusing on things far into the distant like the horizon, clouds, or mountains.  Try to go without the company of your MP3 and the usual music and noise that bombards your ears with constant distraction and entertainment.  Let the ears tune into the more natural sounds around you such as birds and other animals, water flowing, and even wind or breezes. If you live deep in the heart of a noisy city, tune into one of the other senses such as noticing the feel of the air on your skin or the feel of wind or breeze against your face.


Outside of your job and even at home, try some relaxing activities that are not going to bombard you all-the-more with flashes of sound, light, and entertainment stimulation such as video games, movies, and noise.   Tai Chi and Qigong exercises are good for the body and natural exercises that don’t force you to keep up with machines that demand an unnatural speed for the legs or arms.  Yoga can also give your body the stretching and movement it’s not getting while sitting all day at your computer, and many of the exercises related to Yoga and Qigong will help you begin to return to an awareness of the natural pace of the human breath.


Imagine what your day would be like if the electronic gadgets that typically dominate your life were completely removed.  Yes, you’d most likely be bored and unsure what to do with yourself, but the next time you ask yourself why you are so stressed out, think about what percentage of your day is spent attending to gadgets that distract you from the natural world around you—a world that you are an innate part of and which does not naturally manifest from machines.

Thanks to Joana Coccarelli for her great collage art "miss gadget"

There has been a lot of hype lately about meditation as the   mindfulness  movement sweeps the nation.  One of the  reasons  that everyone is so excited about it is because meditation has been shown to reduce a lot of the stress and anxiety related symptoms that haunt people in today’s increasingly fast-paced world.


Sometimes meditation is confused with the idea of just sitting still and relaxing--which is also good for stress--but is not always what is meant by meditation.  Instead, meditation is about training the mind to not drift back into the past to ruminate about things that aren’t happening anymore, nor to race ahead into the future with a lot of “what if” thinking about things that “could” happen, but no one really knows if they will.  In fact, meditation requires no thinking at all.


The steady practice of keeping the mind as present--and as in-the-moment as possible--is no easy task, and it's a lot more than simply sitting still.  The practice can actually be quite a lot of hard work requiring a constant sense of attention to reflect in one’s mind only that which is present right now.  Meditation can eventually be overlaid onto everyday activities and not just sitting practices, but let’s not get too far ahead of ourselves.


The main thing to remember is that meditation involves mental exercises that train the mind to stay present or “mindful”.  There are a wide variety of techniques designed specifically with this in mind, such as counting the breath, or focusing on a word or question.  Sometimes it can be something as simple as directing one’s attention to the feel or sound of the heart beating.


Sitting still and quiet, in a relaxed posture, is very good for the body and reduces symptoms of stress such as increased heart rate, elevated blood pressure, tight and tense muscles, etc.  However, it’s what we do with the mind while sitting still that determines the quality of our meditation and has a direct influence on our level of stress and symptoms of anxiety.
Thanks to Balint Foldesi for the photo "Meditation"
Posted by Mary M Foster, MA LPC at 11:12 PM