Post Election Anxiety and The Way Out of Hell 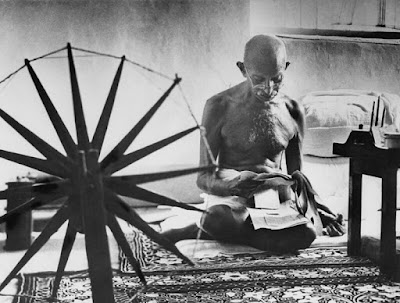 In the movie Gandhi there is a scene in which a Hindu man approaches Gandhi and tells him, "I'm in hell".  The man was tortured by guilt for killing a Muslim boy out of revenge after Muslims killed his own son.  He was also upset that Gandhi was fasting for political reasons and feared he would die from lack of food and that his death would amplify his already heavy burden of guilt.  Gandhi tells the man that he "knows the way out of hell," and that the solution for his guilt was to find a young Muslim boy whose parents had also been killed, and raise him as his own.  But the catch was, he had to raise him as Muslim, not as a Hindu.  In other words, it was the man himself that needed to change in order for any escape from hell to happen.  He'd be required to expand his own awareness, education, and knowledge of his enemy in order to escape his heavy burden of hell.

In Hollywood it's never clear if scenes like this are based on reality or dramatized for effect, but it was known that Gandhi felt that the Hindus and Muslims were all part of the same thread and belonged to the land of India.  And though he saw them all as one, they had become deeply divided and saw one another as enemies.  Yet, his solution for this man (at least in the movie anyway), was for him to travel into the world of those he called his enemy and get to know them at the level of love, where he would learn to know them and their beliefs, and see that they are from the same human cloth as he was.

This concept of ending conflict and animosity by getting to know your enemy--even growing to love your enemy--as yourself, is not new.  Gurus and spiritual leaders throughout history have taught the importance of seeing that there is no separation between us in the large scheme of things.  To see those you disagree with as fellow human beings prevents you from dehumanizing them, and history has shown that the dehumanization of our enemies moves us to begin justifying abuse, violence and destruction against them.  Does this mean you always have to agree with others?  No.  What it means is that you must learn to live with (and even grow to love) those you disagree with.

Here in America, where the presidential election was only a week ago, the talk of finding our way to unity has already begun, just as it did after the 2016 election.  Many in America are fatigued of the polarization and bickering between those who disagree on a broad assortment of issues, and the 50% that voted one way are discouraged by the 50% who voted the other.  But what is the metaphorical equivalent of raising your enemy's child as your own?  How do we find our "way out of hell" here in America, where half the country thinks one way, and the other half seem to always disagree?

One way to reduce our anxiety about the dilemma we Americans find ourselves in is to begin to take a closer look and ask what each one of us can do to become a part of the solution of unity that everyone seems to want.  Do we have to agree on all the issues?  No.  But a change can come within each one of us in which we step a little closer to trying to get to know those we've come to call our enemy.  Being able to agree to disagree is the radical notion that people with different views can live in peace together and don't have to insist that it's one way or the other.  Wiggle room can reveal a middle ground for compromise or polite and peaceful debate.

In his lifetime Gandhi took up the art of the charkha, which is a spinning wheel used to make thread.  It became a symbolic representation during his time in India of independence and self-reliance, as well as self-governance.  I also like to think of it as a symbolic reminder that we are all from the same thread.  We are all weaved together on this precious planet as one human race and it is imperative that we learn to get along in peace, despite our differing beliefs.

So, think about this path out of hell when you are celebrating your seasonal holidays through November and December of 2020, and as you approach the new year, consider making a resolution to step toward (instead of away) from those you consider your enemy.  Start getting to know who these other human beings are and work to see yourself in them, as you allow them to see themselves in you.  And as you travel this path out of hell, you will eventually begin to see that you, and those you disagree with, are really spun from the same cloth.